Sauer Compressors USA is committed to the highest standards of quality, dependability and customer support. Rated for continuous duty, all of our compressors have been field tested in the most demanding applications and extensively refined to provide true 24/7 reliability. 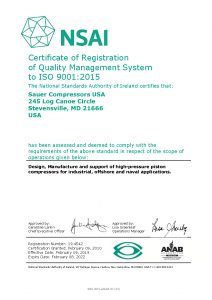 Sauer Compressors USA is the primary supplier of high and medium pressure air and gas compressors for the U.S. Navy and the U.S. Coast Guard.

Dockside High Pressure Compressor Packages have been supplied to

Applications at Other Bases

Sauer Compressors is ISO-9001 Certified. Our inspection process has been qualified to U.S. Department of Defense MIL-I-45208A requirements. Our parent company, J.P. Sauer and Sohn, is ISO 9001 certified.